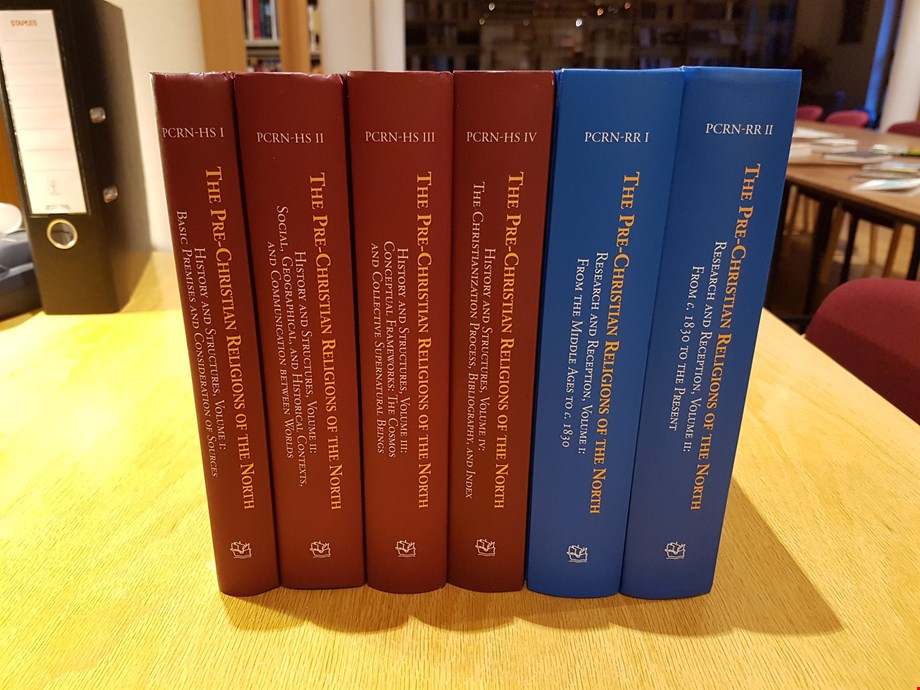 The Research Project The Pre-Christian Religions of the North

The results of the project are published in series of volumes on the subject, and it offers a new assessment of the religion and mythology of early Northern Europe, based on the most up-to-date research in literature, art, archaeology, and the history of religions. A collaborative effort involving the input and a collaborative effort of more than thirty leading scholars around the world, the Pre-Christian Religions of the North project provides a thoroughly researched and accessible series of studies, handbooks, and resources for researchers, teachers, and students of the medieval North. These volumes will become a major reference resource and handbook on a subject that still excites much public interest and on which a great deal of research has been undertaken over the last century.

The whole work is published in three strands, History and Structures, Research and Reception, and Written Sources, and the general editors are John McKinnell, Margaret Clunies Ross, and John Lindow.

The product of an international interdisciplinary team, the History and Structures strand of the Pre-Christian Religion of the North series aims to approach the subject by giving equal weight to archaeological and textual sources, taking into consideration recent theories on religion within all the disciplines that are needed in order to gain a

comprehensive view of the religious history and world view of pre-Christian Scandinavia from the perspective of the beginning of the twenty first-century.

Volume I presents the basic premises of the study and a consideration of the sources: memory and oral tradition, written sources, religious vocabulary, place names and personal names, archaeology, and images.

Volume II treats the social, geographical, and historical contexts in which the religion was practiced and through which it can be understood. This volume also includes communication between worlds, primarily through various ritual structures.

Volume IV describes the process of Christianization in in the Nordic region and also includes a bibliography and indices for the entire four-volume work.

Volume I: From the Middle Ages to c. 1830. It traces the reception down to the early nineteenth century.

Volume II: From c. 1830 to the Present. This volume takes up the story from c.1830 down to the present day and the burgeoning of interest across a diversity of new as well as old media.

Over more than a thousand years since pre-Christian religions were actively practised, European – and later contemporary – society has developed a fascination with the beliefs of northern Europe before the arrival of Christianity, which have been the subject of a huge range of popular and scholarly theories, interpretations, and uses. Indeed, the pre-Christian religions of the North have exerted a phenomenal influence on modern culture, appearing in everything from the names of days of the week to Hollywood blockbusters. Scholarly treatments have been hardly less varied. Theories – from the Middle Ages until today – have depicted these pre-Christian religious systems as dangerous illusions, the works of Satan, representatives of a lost proto-Indo-European religious culture, a form of ‘natural’

religion, and even as a system non-indigenous in origin, derived from cultures outside Europe.

The Research and Reception strand of the Pre-Christian Religions of the North project establishes a definitive survey of the current and historical uses and interpretations of pre-Christian mythology and religious culture, tracing the many ways in which people both within and outside Scandinavia have understood and been influenced by these religions, from the Christian Middle Ages to contemporary media of all kinds.

The following seventh and last volume will be published in 2022 or 2023:

An international team of scholars provides a guide to the various categories of written sources for Germanic and Finnic paganism and discusses the opportunities and pitfalls involved in using them. After an overall introduction, its first section, on inscriptions, includes chapters on Roman period altars, runic inscriptions in the Older and Anglo-Frisian Futharks, and runic inscriptions in the Younger Futhark. The next section discusses sources written about Germanic paganism by outsiders, in Greek, classical

Heimskringla, other sagas of kings, contemporary sagas, family sagas and þættir, legendary sagas and Guta saga. A chapter on placenames will be followed by a section on traces of paganism in post-medieval popular sources, including ballads, folklore and traditional customs and ceremonies. The volume also includes a full bibliography and index.

The Origin and the Development of the Project

The project has its origin in the year 2000, when Dr Jónas Kristjánsson, the former Director of The Árni Magnússon Institute of Icelandic Studies and a member of the board of Snorrastofa, an independent Icelandic research institute, proposed the initiation of a new extensive research project into Nordic mythology and religion. The project in question was then organised by Snorrastofa, which specialises in the medieval period in general and the life and works of Snorri Sturluson – the great medieval poet, scholar and statesman – in particular. The fact that Snorri wrote his Edda, one of the main sources of our knowledge of Norse mythology, made this an obvious project for the young research institute to take on.

Snorrastofa then contacted The Reykjavík Academy and members of the University of Iceland with a suggestion of collaboration, which was immediately accepted. An Executive Board for the project was established, and has been active since

the autumn of 2006. Members of the board are Bergur Þorgeirsson, director of Snorrastofa, Terry Gunnell and Ármann Jakobsson from The University of Iceland, and Ingunn Ásdísardóttir and Viðar Hreinsson from The Reykjavík Academy. The staff of the project at Snorrastofa have included Evy Beate Tveter, Luke John Murphy and Liv Marit Mathilde Aurdal.

Due to the great potential of such a collaborative project, and the importance of the possible outcomes, the first few years of the project were used as a period for reflection and debate, with the Executive Board overseeing discussion and formal meetings with specialists regarding the nature and potential scope of the project. Topics discussed included, among other things, the needs of researchers and teachers, the present state of knowledge in fields related to the study of pre-Christian religions in Northern Europe, and the various forms in which the results of the project could be presented.

After this period of discussion, the Executive Board and the specialists involved in the earliest stages of the project organised it into three ‘strands’, each dealing with a specific aspect of the study of pre-Christian religions in Northern Europe: the “Histories and Structures” Strand; the “Sources” Strand; and the “Research and Reception” Strand, each of which would be produced collaboratively by a number of academics from around the world under the direction of the editors of the various strands, a small group of experts appointed by the Executive Board with a working Editorial Board consisting of John McKinnell, John Lindow, and Margaret Clunies Ross.

The aim of the strands, taken together, is to produce thoroughly researched, accessible and up-to-date overviews and analyses of the various aspects of the pre-Christian religions of Northern Europe, and the myriad ways in which they have been understood and interpreted throughout history. These studies are now culminating in the publication of a range of volumes by Brepols Publishers, an internationally renowned academic publishing house specialising in medieval history, literature and culture.

The project received competitive financial awards and grants from a number of funds and foundations in Iceland, Sweden, the Nordic region as a whole, and Australia. These grants have not only directly supported the writing of the project’s component

studies, but have also enabled the creation of a worldwide network of scholars, academics and students through the funding of seminars and working groups attended by contributors to the project. Our hope is that the outcome of the Pre-Christian Religions of the North project will form an indispensable reference work not only for scholars in this field, but also for those academics and students studying religious systems, comparative religion as a whole, and related fields such as Icelandic, Scandinavian, and Germanic literature, folklore, culture and history. 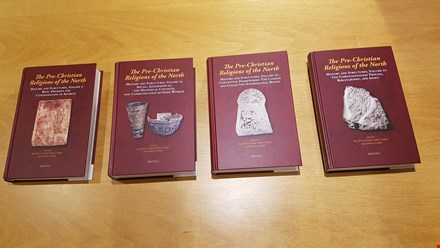